Now that the new year has begun and we are in the middle of winter, I have time to plan for this year’s garden and also to make plans for becoming more resilient overall. Here is a look at garden planning for 2013 at Living Low Acre.

Recently I created a spreadsheet of the highest yields I have obtained on a square-foot basis over the 12 years I have kept detailed records for each crop. For each crop I listed the variety, garden spacing (in one of three different columns depending on whether I used the square foot method, Jeavons’ triangular spacing, or Solomon’s row spacing for that variety), sowing and transplanting (if applicable) dates, the measured yield in pounds per 100 square feet, and a code of L, M, or H to indicate the correspondence of my yield to what is claimed in the 8th edition of How to Grow More Vegetables. My intention is to better understand the factors that affect yield in my growing conditions. For certain varieties of tomatoes, for instance, I can exceed the best yields in HTGMV by a factor of 2 in the best years. For most of the crops that prefer cooler growing conditions, on the other hand, I have found it difficult to obtain high, or even medium, yields. You can see the results for yourself in the two images below. (I had to print out and then scan each page of the spreadsheet because I don’t know Blogger well enough to determine if I can upload the spreadsheets directly. The column headings for the second image are the same as for the first image. The backgrounds are different colors because I printed each page on the back of previously used paper and the two sheets are of different ages.) 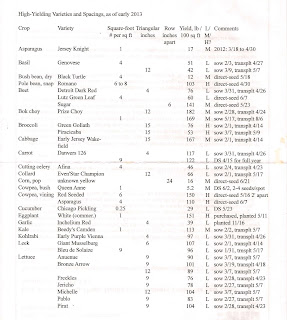 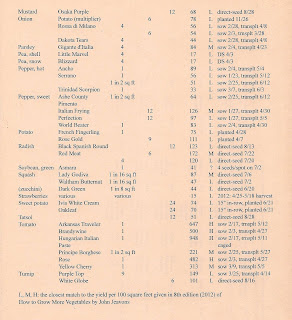 The only crops that met or exceeded my expectations for yield in 2012 were tomatoes, garden peas, blackeyed peas, leeks, and carrots. Tomatoes and blackeyed peas loved the hot, dry summer, and the blackeyed peas matured earlier than the Black Turtle dry beans, thus avoiding fall rains that caused some of the bean crop to mold or germinate in the pod. Garden peas do surprisingly well here, although I have not tried to save seed for them, which would reduce yields as I’d have to leave some of the patch unharvested until the pea seeds matured and dried. I think my success with leeks and carrots had much to do with my planting them at the right time and, in the case of carrots, leaving them to grow for the entire season instead of harvesting them in midsummer and then trying to sow them again in late summer for a fall crop. The carrots that I left to grow all summer long and harvested in fall grew quite large but still remained crisp and flavorful. Leeks continued to grow throughout summer and fall, unlike the onions which had to mature during much hotter weather than they prefer, lowering their yield.

As I looked over seed catalogs and pondered how to improve my garden, several things struck me as worth trying in 2013.

1. I’m going to stop trying to grow kale and collards as a spring crop. We didn’t use enough of them in spring and early summer compared to bok choy, cabbage, and broccoli. Once July hit, a combination of heat and harlequin bugs killed all of the kale and most of the collards. What I plan to do this year is to grow a spring and early summer crop of bok choy, cabbage, and broccoli.  All of these will be harvested in June through early July. Mike will turn much of the cabbage crop into sauerkraut for eating through winter. Then I will remove all brassicas from the garden until I direct-seed for fall crops in an effort to reduce the harlequin bug population. In the fall I’ll try growing bok choy, turnips, rutabaga, storage radishes, and very cold-tolerant varieties of kale, collards, tatsoi, arugula, and mustard greens. I’ll harvest the bok choy, turnips, rutabagas, and radishes before winter and leave some of each of the others in the garden, uncovered, to see if they will overwinter for me. Last winter the low never dropped below 10F at our house; varieties that are supposed to survive to 6F can be found here.

2. I plan to grow more carrots, beets, and parsnips in 2013. I’ll sow all of these in the spring and leave all of them (except for the Cylindra beets) in the ground until after the first fall frosts. My observations from 2012 suggests this should increase the weight harvested per unit area and allow me to store more food for eating in winter and spring of 2014. The Cylindra beets are fast-growing so I hope to get two crops, a summer and fall crop, out of them; if that doesn’t work, I’ll drop them and grow only the sugar beets after this year.

3. With the weird, changeable weather we get it’s hard to know whether to grow Irish potatoes or sweet potatoes. I like Irish potatoes better, but they prefer a longer stretch of cool weather than we get here in the spring or fall. It’s hard to store potatoes during our hot summer weather. Sweet potatoes grow very well during hot summers, but the year we got 12 inches of rain in October, the entire crop rotted before I could dig it up. While they store very well during the winter and I have been able to use stored sweet potatoes to generate the next summer’s crop, I don’t like them as well as Irish potatoes. This year, I’ll try both again, planting 75% of the space to Irish potatoes and 25% of the space to sweet potatoes, and let them fight it out for yield, storage, and kitchen use qualities. May the best potato win ...

4. I used the spreadsheet above to set up my garden calendar and garden plan, in an effort to obtain more-consistent yields from every crop. At the end of next year we’ll see if I was successful; I’ll refine the plan each year so I can provide more of the food we eat every year.

5. New garden crops I’m trying this year include tomatillos, ground cherries, rutabagas, parsnips, and peanuts; two new varieties each of tomatoes, eggplants, and cabbage; and one new variety each of sweet pepper, dent corn, lettuce, Irish potato, and sweet potato. I also plan to try a different trellising system for cucumbers, melons, and squash in hopes of increasing yields for all of these. I’ve set up two new garden areas in which I plan to try some perennial vegetable crops such as scorzonera, Siberian pea shrub, daylily as a food plant (flower buds), perennial onions, and chicory as well as add space for growing pole beans on trellises. I plan to try a few new herbs as well. Finally, I will try again to grow tea (Camellia sinensis) on the east side of our house in place of the bridalveil spiraea shrubs currently in that area. Wish me luck on the last; the tea plants I have in containers suffered from the heat in the summer, but I hope that their roots might stay cooler if planted in the ground on the shadier east side of the house. I’ll put a wind barrier up to protect them from winter winds. The tea plants I ordered are reputed to survive Zone 7 winters, a criterion St. Louis has met for the past 12 years.

I’ll put the rest of the plans in a second, hopefully shorter, post next week. After that I plan to (finally) write the post on low-cost ways to start seeds and then continue the series on how I got here.