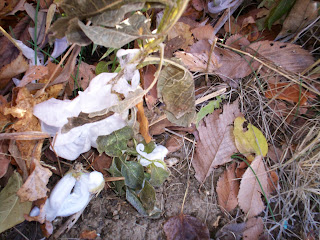 Now that the growing season is over, and thinking my handful of fans might want to know a little more about what Mike and I are doing on a weekly basis, I'm planning to write a short post most weeks to update you on the previous weeks' activities. I expect most of what I report will be relevant to the larger purpose of this blog, and I plan to keep the posts short so I will actually write them. I will still write longer pieces on particular topics and post them when they are complete. One is in preparation now. The sooner we get more rain, the sooner it'll be posted. ;-) After that one is posted, I'll start writing up the season's results on the vegetable plantings and consider what the garden told me this year. Then I'll be ready when the seed catalogs hit the mailbox. :-)

With the first taste of winter hitting us this week (we had a trace of snow on Tuesday evening that didn't completely melt till today), Mike and I walked to the local park to look for frost flowers. These are formations that occur when temperatures in the vicinity of 20F freeze the residual water in the stems of a few kinds of native flowers. As the water freezes it expands, bursting apart the stems. The interaction of the burst stems, the water, and the cold temperatures result in the water freezing in ribbon-like sheets that are delicate and beautiful. Some years ago Mike and I happened on frost flowers during a walk to the park and since then, we try to catch them every November during the brief period when the conditions are right for them. This year I took my camera and the result is the photo above. Enjoy!

I had plenty of warning that the low would dip below 20F yesterday morning so most of last week's garden work was spent planting remaining seedlings, harvesting vegetables that would be killed or seriously damaged by the cold, and emptying the rain barrels and tank. The seedlings I planted were native flowers that a gardening friend raised and gave to me. While I plot out the vegetable garden quite precisely, I plant flowers by intuition. Until I knew that the seedlings had to be planted, I didn't realize where they would go. Finally, under the pressure of having to plant them ;-), I knew where they should go and got them in the right places. They are watered-in and ready to face the elements.

Now that the growing season is over, the rain barrels and rain tank needed emptying and the hoses storing in the basement. The St. Louis area is still in moderate drought, so I made sure to direct all the remaining water to the shrubs and trees I planted this year and to the newly-planted bed of garlic and potato onions that was also part of the week's tasks. I planted about twice as much garlic and potato onions this year as last. This year I'm trying elephant garlic for the first time. With the potato onions, I hope to increase the supply to the point that they become most of the onions that we eat. They are much easier to handle and plant than tiny onion seedlings, and they are planted now, when there is little else to compete with them and weather is less of an issue than it is in spring. However, they do need to be mulched at the right time in early winter (to prevent frost heaving) and to have the mulch removed in early spring when it is time for new leaves to grow in order to get a good yield from them.

With the below-normal temperatures that St. Louis has shivered under for the last few weeks, we are running the furnace. Mike and I keep it cool, to 60F, during the day. That's cold enough to stiffen my fingers, not something that facilitates practicing music. So I'm experimenting with finding the right setting for evening that will un-stiffen my fingers enough to feel some wish to practice. 65F surprised me by feeling a little too warm. (I'm quite sensitive to cold, hence the surprise.) Now it's set for 64F in the evening. The plan is to find the lowest setting at which my fingers are warm enough to practice well, and to actually practice some music.

Plans for the next week

- Finish harvesting carrots and harvest sugar beets
- Continue shelling and weighing the dry beans
- Weigh the peanut harvest, set aside seed for next year, open a few peanuts to check on seed size, and roast some of the crop to see how they taste!
- Finish the longer post in preparation
- Rake up and use fallen leaves for compost and mulch
- Put down winter wheat seeds as cover crops in two beds