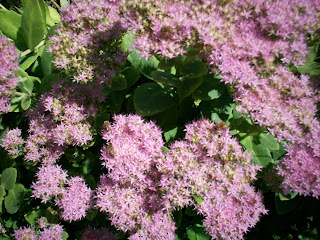 Blogger seems to be behaving better today, allowing me to import images again. Above is Autumn Joy sedum. Although my point-and-shoot digital camera doesn’t have the resolution to show them, bees are busy working the flowers.

As we leave summer behind, the planting decisions I made last winter and the combination of my actions to prepare, plant, and weed beds along with Nature’s provision of air, sunshine, water, and soil have produced enough food so that some of our meals are now almost entirely homegrown. This week I’ll share with you what we’ve been eating and how that will change over the next few days and weeks.

For the salad course, Mike, our primary household cook, has been preparing a mix of homegrown ripe sweet peppers, cucumbers, zucchini, carrots, and onions for about the last month. Not all of these have been featured in every salad but the base has been peppers, cucumbers, and onions along with whatever of the others we’ve had on hand when the salad was prepared. It’s been a good year for each of these three crops; even though the red and yellow onion crop suffered from the excessive June and early July rains, we have some remaining and I have more than enough potato onions (a multiplying, perennial onion that tastes the same as yellow onions) to provide all the onions we’ll need into winter and perhaps next spring.

Now, however, the squash bugs and the hot, dry weather of late August and early September have put an end to the cucumbers and nearly so to the zucchini, and the small carrot harvest has been eaten. To compensate, however, the arugula has grown enough to be included in our salads. The only issue with it is thinning and eating it fast enough to allow the remaining arugula to grow on and to avoid having any harvested arugula go bad before we can eat it. By necessity, those who have a big garden have to plan the kinds and amounts of crops grown to provide an ongoing harvest and also must put in the time in the kitchen to convert the harvest into food on the plate.

For the main dish on our homegrown meal days, we are eating snap beans and potatoes in some form. It has been several years since I grew a successful snap bean crop, so I had almost forgotten how much a good stand of pole snap beans can produce. About 3 1/2 pounds of the long, flat Roma-type beans, about 2 pounds of a shorter heirloom snap green bean, and about 2 1/2 pounds of a Red Noodle type bean (really a cowpea but eaten whole, similarly to a snap bean) await use in our refrigerator. Meanwhile we have 80 or 90 pounds of potatoes holding in the darkest part of the basement. Mike and I have differences in how we prefer to use these foods to make up the main portion of lunches and dinners. He likes to boil the potatoes and then add slightly cooked beans to the pot with the potatoes so the beans cook the rest of the way in the pot, eating the mixture as a stew. I like this well enough but have a slight preference to eating the potatoes and beans separately. The beans can be boiled or stir-fried; the Red Noodle beans seem to be especially good when stir-fried, in my opinion. Potatoes can be mashed, boiled, roasted, fried, or made into a casserole. A week or two ago, I made scalloped potatoes in a slow cooker rather than in the oven, following the recipe in The Gourmet Vegetarian Slow Cooker. They tasted nearly the same as when the dish is made in the oven, with less heating up of the kitchen and, I suspect, less energy usage as benefits of choosing the slow cooker to make the dish. As I type, potatoes are roasting in our sun oven, to eat for lunch along with leftover snap beans (and there should be plenty of leftover roasted potatoes for future meals). Together, potatoes and beans provide a complete protein profile as well as calories and various nutrients: along with the salad, this is the sort of meal that a backyard garden can readily provide in this climate. We’ll have fresh beans until frost, stored potatoes longer than that. Later on popcorn and dried beans will take over for the green beans, and winter squash and sweet potatoes will join the potatoes. Along with greens and root crops to come later for use in salads and stir-fries, these will form the foundation of homegrown meals through fall, winter, and perhaps early spring of next year. My goal is to learn how long we can stretch out the food supply and, knowing that, modify the garden plan and how we store food to stretch out the availability of homegrown food into spring and even early summer, before summer’s main crop harvest begins.

On September 6, the high was 96F / 36C. On September 10 the high was 88F / 31C. By September 12 the high was only 70F / 21C. At our house on September 13, the morning low was 46F / 8C, a few degrees cooler than the official low of 51F. This is autumn in the Midwest: warm or even hot spells followed by ever stronger cold fronts sweeping through, then followed by more warm weather until the next cold frontal passage. Over the three months of autumn the bottom of the cold spell will become colder and the rebound become less warm, till by late November we should transition into mostly cold winter weather punctuated with brief spring-like warm-ups. We received some rain from the weekend cold front, but once again much less than the official St. Louis weather station about 10 miles away. It’s not the fact that the rainfall varies so much over short distances that puzzles me; that happens often. It’s the fact that starting in June, the pattern has so consistently favored the official station getting more rain than we do. I don’t think anyone can explain it. It will just be one of Nature’s mysteries, even quirks.