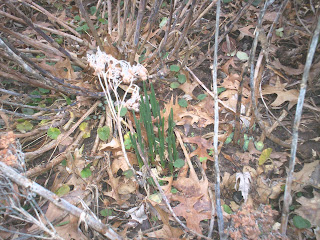 It’s New Year’s eve, one last opportunity for a post during 2015. I may as well take advantage of it.

From December 26 through 28, we had one of the heaviest rainstorms in St. Louis’ history. As much as 9 to 10 inches of rain fell across portions of the metropolitan area, oriented in a band running roughly northeast to southwest. We were within that band, as was the official weather station. As a result three new rainfall records were set, one for the most rain on any day in December (4.87 inches on the 26th, which is the third highest daily rainfall total measured for St. Louis), one for the most rainfall in the month of December (11.74 inches), and one for the highest yearly rainfall (61.24 inches in 2015). With the soil wet to start, almost all the rain ran off into the rivers, creating major to record flooding. The Meramec River, which defines the southern border of St. Louis County, was especially hard hit, with several locations on the river in St. Louis County breaking their old crest records, set back in December 1982. Interestingly, it was the 1982 crest which inundated Times Beach, one of the towns along the Meramec, spreading dioxin-contaminated road dirt all over the town and prompting its eventual demise. Back to this year ... three separate interstate highways had closures this morning due to floodwaters on the roads. One of the local meteorologists says that’s a first. Luckily we live on high ground, far from all those issues.

But in other ways we are as affected by the weird El Nino winter weather as everyone else. The photo at the top shows that our earliest daffodil leaves are already growing. I would not be surprised if this happened in January. In fact it is typical for some daffodil leaves to show up above ground sometime during January when the soil has a chance to thaw. But I cannot remember seeing daffodil leaves in December before. The soil hasn’t frozen yet and it shouldn’t for at least another week given the forecast and how wet it is (as water freezes it gives off heat). I still have mustard greens and arugula in the garden, which we’ll be eating now that we’ve eaten all of the stored bok choy.

Speaking of the garden, the next post will begin my recap of our garden year. For now, suffice it to say that overall it was the best ever. Give me a couple more weeks and you can read all about it. And a few more weeks after that, I’ll let you know what the garden and I will be discussing in 2016.

A very happy New Year to all of you!
Posted by SLClaire at 2:30 PM