A slice of garden life: the harvest of July 22

I have received a request to post pictures of a recent harvest to this blog. Since I’m still in the process of writing a post on the nutritional content of this year’s garden and whether or not it would be sufficient for a complete diet for a vegan adult for a year, this is a good time for a quick post that’s heavy with pictures. The pictures below show the complete harvest of July 22.

At this time of year I’m primarily harvesting squashes, cucumbers, and tomatoes. Although I could have chosen to harvest some beets and carrots as well, we have enough vegetables in the refrigerator to leave the beets and carrots in the ground for now.

With that said, let’s begin with the cucumbers and zucchini I harvested on the 22nd. You’ll see them below. The basket is 11.5 inches in diameter. Mike added the cucumbers to the pickling container for us to eat as pickles later on. We use some of the zucchini raw, adding tomatoes, onions, and carrots to make a salad. The rest of the zucchini is used in stir-fried dishes. 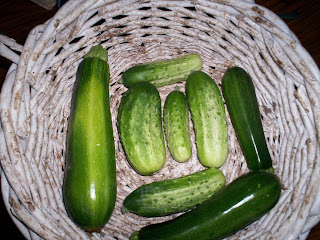 In the next picture, the same basket holds six ‘Desi’ summer squash. These will all find their way into stir-fries. 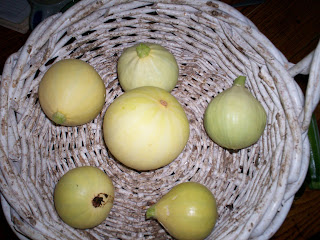 Below you’ll see two of the four heirloom tomato varieties I’m growing in the same basket. The yellow tomato with red stripes is ‘Old German.’ It’s not as productive as the others, but we enjoy it for its flavor and contrasting color in the summer salads I described. By itself the tomato weighs nearly one pound! The surrounding tomatoes are ‘Arkansas Traveler,’ a workhorse of a tomato in this climate. It combines great taste with no green shoulders, depriving the compost pile of some material and leaving more tomato for us to eat. 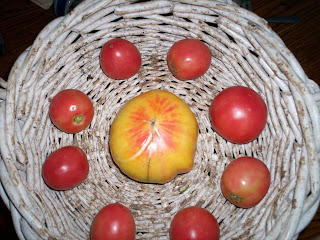 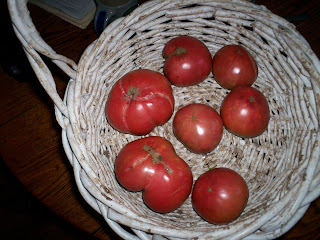 Each of the three tomatoes already shown find their way into salads, with excesses being turned into tomato sauce. The final tomato variety shown below in the same basket, ‘Roma VF’ is a paste tomato that we use exclusively for tomato sauce. It has less pronounced flavor than the others, but it also has less water so it adds volume to the sauce. 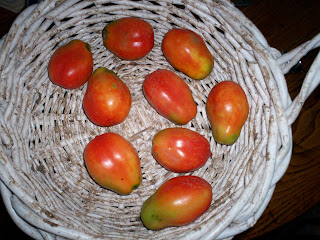 We are still waiting for some other summer crops to size up (green beans, eggplants, potatoes) or ripen (sweet peppers, raspberries). Today, the 25th, I harvested the first ripe red sweet pepper. Within the next couple of weeks we should be harvesting the first crops of each of the rest of these.

That’s all for now. Enjoy whatever is in season where you live!