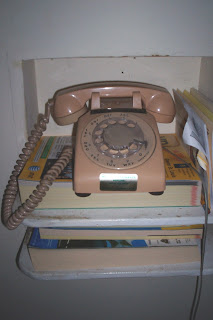 As cell phone usage has become near-ubiquitous, I’ve noticed what to me, with only a landline phone, is an annoying tendency for people not to identify themselves when they call. Standard phone etiquette for many years was to identify yourself immediately after the person you called answered the phone, since you wouldn’t otherwise know who was calling unless you recognized their voice. I realize that cell phones include caller ID so identifying yourself isn’t necessary, but hey, not everyone has a cell phone or caller ID. I still think it’s polite for people to identify themselves when they call, and I continue to do so whenever I call someone, even my mother who after 55 years surely recognizes my voice. Once caller ID service was added to our phone service, however, I realized that if we could find a caller ID module at a thrift store or garage sale, we too could know who was calling and at least make use of a service we were paying for. Obsolete devices like these are easy to find cheap in such venues. Sure enough, last week we found a new in the box caller ID module at a garage sale. We paid $1.25 for it. It works perfectly. This is the Living Low Way in action.
Posted by SLClaire at 1:57 PM 3 comments:

Here is a calendar of planting dates for veggies that I have found works well in the St. Louis region. Our average last spring frost date is about April 8 and our average first fall frost date is about October 31. We have short springs and falls with wide temperature swings and a long, hot summer. The calendar reflects these seasonal realities.

Mid March through mid April: potatoes; onion and leek sets or seedlings (put out seed in early to mid March for these); peas and lentils. For all of these, earlier is generally better, if you can manage it.

Before the end of April: cabbage, kale, collards, mustard greens, bok choy, broccoli, arugula, lettuce, radishes, beets, turnips, carrots, kohlrabi. Seeds of the greens and lettuce should be planted early in the period if at all possible. I generally plant seedlings of the greens and lettuce and prefer to plant these after the first week of April in case of a late freeze.

Late April through June: beans, green and dry; edamame and other varieties of soybeans; black-eyed peas and other cowpeas; corn, all types; squash family members (summer and winter squash and pumpkins, cucumbers, melons, gourds), as either seeds or seedlings; tomato, pepper, and eggplant seedlings; sunflowers; sweet potatoes; okra. You'll generally get a bigger harvest if you plant in May rather than June on all of these, but you do have this long a window for successful planting. If you're planting in April or the first week in May, check the weather forecast first to ensure that frost isn't in the forecast; if it is, wait till after the first week of May to plant. Our latest recorded last spring frost date is May 10.

I don't plant anything in July because of the heat. Some folks plant bush green beans in July for their fall crop of beans; I prefer to plant pole beans in May or June, which continue to make beans till frost. If you want to try for a fall potato crop, you're supposed to plant the potatoes by July 15. I find the soil is too warm most years to make the crop worth the effort of planting.

August: seeds of the same crops listed in the before-the-end-of-April section (do this during a stretch when the overnight low is in the 60s for good seed germination). The large storage radishes like Red Meat and Black Spanish can only be planted now, not in April; they go to seed when planted in the spring. Small salad-type radishes can be planted in September as well as August.

October: potato onions (a multiplying onion similar to shallots) and shallots; garlic.
Posted by SLClaire at 3:33 PM No comments: