Backyard garden reality revisited, part 1: can my current garden feed me for a year? 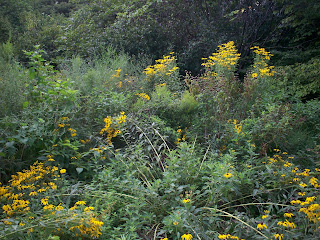 
In 2013 I critiqued a concept that has become embedded in discussions about living sustainably: that it is possible to grow all the required calories and nutrients needed to maintain health for a vegan diet for one adult in a space of 1400 square feet or less. David Duhon designed gardens intended to do just that using the medium yields for crops in John Jeavons’ book How to Grow More Vegetables and published his results in the book One Circle. While I find the procedure Duhon used to be valuable in analyzing the nutritional possibilities of a small garden space, a careful reading of that book and subsequent garden design publications from Ecology Action shows that these are thought experiments only. The most recent small garden diet design I’ve seen from a source outside of Ecology Action is also a thought experiment. I wanted to know if a real gardener in a particular place could obtain high enough yields to grow a complete diet for a vegan adult in 1400 square feet or less while also practicing sustainable gardening principles such as crop rotation and soil re-mineralization. I promptly volunteered myself for the role of that real gardener and have spent the last 8 growing seasons seeking to answer the question for my suburban St. Louis, Missouri garden. Now I have learned enough to wrap up the project in this and the next few posts. I’ll begin with my current garden design and ask what percentage of an adult vegan’s diet for a year it can supply.

I garden in a fenced-off area of the backyard with full sun exposure containing twelve 100 square foot beds separated by paths. This post discusses the reasons for my adoption of the gardening techniques and soil re-mineralization methods described by Steve Solomon rather than those promoted by Ecology Action. Each report on the previous year’s garden such as the most recent report includes the spacing and timing for each crop I grew that year and the yield I obtained. I have set up the garden so that the group of three beds of corn rotates as a block through the nine beds planted to grains or vegetables, so that any one bed in the garden is grown to corn one year, then to something other than corn for the next two years. Each of the other beds is rotated so that no bed is grown to crops of the same plant family two years in a row. This feature addresses one of the major flaws in Duhon’s designs, the inability to rotate crops properly. My garden design addresses the climate limitations of my location, such as the inability to overwinter any crops other than potato onions and garlic in an open garden. The very short springs and autumns I experience restrict double-cropping, a feature of Duhon’s designs that does not translate well to this climate.

·      One bed of annual and perennial flowers and herbs, including sorrel, the only crop eaten as a vegetable from this bed

·      Three beds of popcorn, two of which also include naked-seeded pumpkin vines

·      One bed consisting of peppers, tomatoes, eggplants, and basil

·      One bed of squash-family plants (summer and winter squash including zucchini, cucumbers, and muskmelons)

·      One bed of overwintering potato onions and garlic. After June harvest, this bed was replanted to a mix of zinnia, sunflowers, cucumbers, soybeans (for edamame), and zucchini

·      One bed of potatoes. After the potato harvest this bed was planted to an autumn crop of greens and roots, mostly from the cabbage family but also to include lettuce

·      One bed of spring-planted greens and roots, including lettuce, cabbage, bok choy, carrots, beets, and leeks

The spreadsheet below includes the names of each variety of each crop that I am growing this year; whether or not the crop is a grain (G), dry bean (B) or special root crop (R) according to Ecology Action; a yield I have obtained for that crop, in pounds per 100 square feet; and the number of square feet of garden space I have allotted for that crop in the 2021 garden.

Because I am in the middle of the growing season, I only have a yield for 2021 for the crops I have already removed from the garden. On the spreadsheet, those crops are in bold type. Some of the varieties I’m growing this year are new to me. Those crops are in italic type. For these crops, I have reported the best yield I have obtained for a similar variety that I have grown.

For the rest of the crops, I have reported the best yield I have so far obtained for that crop. Some of the crops may yield better than that this year. Some may not yield as well. Thus the best I can do is approximate the percentage of a complete diet for one vegan adult that I will grow this year. You’ll soon see that this is good enough to answer the question.

In the case of popcorn, some animal – I suspect squirrels – has already eaten every single ear on every plant. In its place, I have substituted the dent corn variety that I have grown in previous years and the best yield I obtained for it, which occurred in 2019. Thus the results given in the spreadsheet are actually an overestimate of the nutrition that the 2021 garden will provide. However, including it gives an upper limit to how much nutrition this garden design is capable of providing when everything goes right.

How To Grow More Vegetables includes the calories, protein (in grams), and calcium (in milligrams) for each crop listed in the Master Charts. Using the total weight of each crop that I have already harvested or that I can reasonably expect to harvest, I multiplied the per-pound values given in HTGMV by the weight of each crop in pounds to obtain the total calories, protein, and calcium provided by that crop. Summing up the columns for each of those provides the total amount of calories, protein, and calcium that I estimate I will harvest from the garden in 2021. Then I divided that number by 365 to obtain the daily amount of each, to compare with the dietary needs chart on pages 69-71 in One Circle. 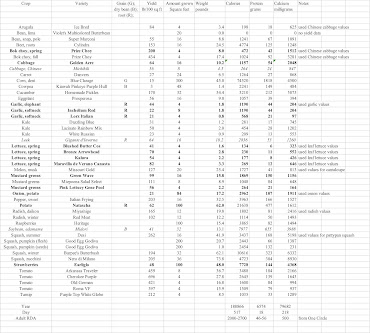 No, my current garden will not supply me with sufficient calories, protein, or calcium to sustain me for a full year. In fact, it falls quite far from that standard in both calories and protein, by a factor of three to five. In terms of calcium it does somewhat better, supplying me with close to half of what I need for a year. Since two adults are eating from this garden, the garden falls even farther short of supplying us with a complete diet.

Why does Ecology Action highlight grains, dry beans, and certain root crops in their gardening method? A look at the spreadsheet gives the answer. The corn crop provided by far the highest amount of calories compared to any other crop – more than half of the total, in fact. Potatoes, one of the special root crops, were also a significant source of calories, as were soybeans even though they were eaten green rather than dry. If the cowpeas had yielded better they also would have been a significant source of calories. The corn, potatoes, and soybeans were also the most significant sources of protein. Garlic and leeks provided good amounts of calories for the small amount harvested. This is why Ecology Action recommends allotting about 60% of garden space to grain crops (this category also includes dry beans), about 30% to high yielding root crops such as potatoes, garlic, and leeks, and about 10% to everything else. Such a design, however, has the disadvantage of not allowing for crop rotation unless you include grain crops that are not in the grass family, such as sorghum or quinoa, in the grain crop area in sufficient quantity to avoid growing plants in the same crop family in any bed two or more years in a row.

Using the current garden design, then, my garden would need to be four times the size it now is, or 4400 square feet, to provide a just-sufficient amount of calories and protein for my needs. Could a change in design using the same crops that also allows for proper crop rotation reduce the space needed to grow a complete diet? I’ll investigate that possibility in the next post.