Update and link to interview of me 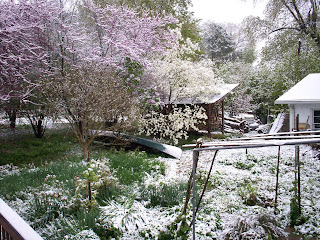 Accumulating snow on April 20. Note the redbuds and dogwood in bloom.

Last week Mike and I experienced accumulating snow. It's certainly not the first time it has snowed in April in St. Louis. In fact it's not that uncommon to receive snow in early April. However, in the 36 Aprils I have lived in St. Louis, none has included an accumulating snow after the middle of the month, until this one.

It was bad enough to receive snow, but worse that it was accompanied by two freezes, on the mornings of April 21 (30F) and April 22 (32F). All of the fruit trees except for the persimmons had flowered and leafed out. Only the pawpaw trees show damage to the leaves and flowers, so it could have been worse. I won't know how significantly this year's pawpaw crop has been affected for some time.

This isn't the post I promised you on what I'm asking the garden this year. After I complete another writing commitment I will write that post. But I do want to draw your attention to Lisa Brunette and her blog Cat In The Flock. Lisa and I met through a mutual interest in John Michael Greer's work and found out we share gardening and blogging interests and write about our gardens, among other topics, on our blogs. Lisa and her husband Anthony Valterra live in another of St. Louis' many suburbs. In the last year or so we've become friends, and I've become a fan of Lisa's blog (you'll see it over on the blogroll). If you enjoy my blog, you'll enjoy Lisa's as well. I really like her and Anthony's sense of style as well as the practical work that they do. They make living with LESS beautiful!

Recently, as Lisa explains on her blog, she interviewed me and will feature that interview on three posts. You'll find the first post here. The next two go live on May 2 and May 5. I encourage you to read them and to enjoy the other posts on Lisa's blog as well. And thanks to Lisa for the interviews and for her work!

In the previous post I discussed the severe cold wave in Texas that came close to crashing the electrical grid for almost the entire state. The estimated insured loss from the deep freeze in Texas and surrounding states will exceed $10 billion. That doesn’t include the additional cost for the extreme rate hikes in electricity and natural gas when many of the plants went offline; ratepayers will be stuck paying for that for years. Nor does it include the estimated costs for freeze-proofing any of these systems before the next deep freeze occurs.

If the Texas electric grid were the only bit of aging infrastructure that is in desperate need of upgrading, this wouldn’t be a problem outside of Texas. But it isn’t, not by a long shot. The ASCE’s collective grade for all US infrastructure is C-. That’s an average; some of our infrastructure gets D+, D, and even D- grades. Those of you who want to know the grades for the infrastructure in your own state can find it on the linked page.

True, it’s not as if the ASCE is a disinterested observer. Their members stand to benefit financially from upgrading the country’s infrastructure, so I expect them to take the most pessimistic view of the situation. But that doesn’t mean that we aren’t already paying for the infrastructure we’ve got and the upgrades already occurring. And it doesn’t mean that our infrastructure doesn’t need any upgrading; just ask anyone who lost electrical service to freezes, the risk of wildfire, severe storms, and the like, or anyone who lives downstream of a dam that is at risk of failure, or anyone who has to play dodge-a-pothole every time they drive.

From time to time, our politicians take notice of our infrastructure. President Biden has recently proposed a $2 trillion plan that addresses deficiencies in many of the areas highlighted in the ASCE report. (It also contains some items that aren’t strictly infrastructure upgrades but are intended to appeal to the Democratic party base.)

Most politicians, and most people, probably favor improving infrastructure, especially the infrastructure that is closest to them and most obviously in need. But the work can’t be done for free. To pay for the plan, Biden proposes to raise the corporate tax rate from 21% to 28%, a proposal that the Democratic party base will generally favor. However, the Business Roundtable, made up of the CEOs of the nation’s biggest companies, and the US Chamber of Commerce have already denounced the tax rate increase, proposing instead that user fees such as highway and bridge tolls fund the improvements. I’m pretty certain that most ordinary people, who are already paying for infrastructure maintenance and improvement via drastic increases in utility bills (our sewer rates have increased fourfold in the past 17 years and we are being asked to vote on April 6 for yet another rate hike to pay for a bond issue to fund more work on the sewer system), aren’t inclined to agree to higher taxes and user fees to fund the improvements. If I were a betting woman, I’d bet that this proposal isn’t going anywhere in its current form. No Republican will vote for it, and enough Democrats won’t that it won’t make it out of the Senate, even if it gets through the House, and I’m not sure it will get that far. Possibly a smaller-scaled infrastructure bill will make it through, but such a bill won’t be enough to do more than fund a few pet projects in a few districts whose politicians have enough influence to direct dollars toward them.

Having noted what should be reasonably obvious – that we aren’t willing to pay to maintain all of the infrastructure that we already have – let’s take a look at the entirely new infrastructure that will be required to expand the use of so-called “green” electricity. “Green” electricity means electricity that is supposed to release smaller amounts of greenhouse gases like carbon dioxide and methane into the air than is produced from burning fossil fuels. The technologies usually considered in this category are solar and wind powered plants, hydropower (dams), and hydrogen produced from splitting water by solar power and used to power fuel cells that produce electricity. Hydropower is already using all of the best sites, and there are attempts to remove some of those dams for environmental reasons, so I won’t consider it any further. Solar and wind power not only require the solar and wind plants that don’t already exist to be built, but they also require a major upgrade of the existing electrical grid to accommodate the intermittent nature of these two sources, which I have argued above is at best unlikely.

As for hydrogen, the hip new source of “green” electricity, rather than my addressing all the reasons that this is just one more subsidy dumpster, one more rathole for government money, I’ll just direct you over to this blog. Read it and then try to imagine all of the infrastructure that will be required for hydrogen fuel cells to make enough electricity to run enough cars to matter, at an efficiency that is less than that of a standard electric vehicle.

And as if all that isn’t enough, every bit of current infrastructure that must be at least maintained, if not upgraded, and all of the bright shiny new “climate-saving” infrastructure that is being pushed as absolutely necessary by the climate-emergency crowd, requires energy and materials to do so. Specifically, diesel fuel, produced from oil, goes directly or indirectly into maintaining or upgrading existing infrastructure, not to mention producing and deploying and maintaining new infrastructure. I understand why you may not have paid much attention considering what the past year or so has brought to us, but it turns out that we may well have passed peak oil more than two years back. Check out the graphic near the beginning of this Energy Bulletin of world liquid fuel (oil) production (the blue line on the graph). Notice the slow rise to a production peak in the 4th quarter of 2018. Notice that the highest production peak in 2019 didn’t quite match that of the 4th quarter of 2018. Then comes the familiar rapid drop of oil production and consumption in 2020 resulting from the measures put in place in reaction to COVID-19 that were intended to bring us back to “normal.” You’ll notice that the forecast for oil production in 2021 doesn’t make it up to levels we last saw in 2017 until late in the year, and that was, in retrospect, almost surely optimistic given the forecast was made last December when the concern about vaccine-resistant variants of COVID-19 was less than it is now.

Meanwhile, the deep cuts to capital expenditures made by oil companies during the past few years when oil prices dropped to levels that the companies couldn’t profit from suggest, if not too little oil available for the infrastructure upgrades that Biden and other politicians are promoting, at least a rise in the price of oil due to increased demand meeting reduced supply from the reduction in capital spending that would have funded the new sources of oil that infrastructure upgrades and additions require. But oil prices can only rise so high before they drive an economic downturn similar to 2008. I don’t expect us to be able to afford to maintain all of our current infrastructure under these conditions, much less upgrade it or add new infrastructure. Sure, some projects will get funded by political influence and subsidy dumping. But most of us will do more of what we are already doing: paying more money than we already are for services that are no better than, and likely worse then, what we already have, or being forced to drop services in favor of less resource-intensive ways of providing for ourselves.

And that’s why I keep this blog. Why are so many people gardening now? Among other things, it feeds us for less money and less infrastructure than any other way I know of. Why do people need to know about how to stay comfortable in a cooler residence in winter and a warmer residence in summer? Because it’ll reduce the drain on your wallet as utility prices rise to reflect deteriorating infrastructure and energy price spikes. At some point I plan to pick up the human-powered tools theme that I began some years back, because human-powered tools can do most of what fossil-fuel powered tools do without the infrastructure that fossil fuels require. I will probably touch on other aspects of home economics as time goes by, especially if the suspicions I’ve detailed above eventuate.

Next time I’ll write about this year’s garden project. Till then, I wish you all a good April!

Posted by SLClaire at 3:51 PM No comments: