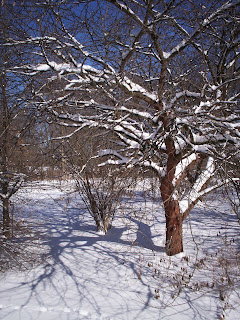 One of our largest snowfalls of the winter, on February 4


Each year, as I reflect on how the garden answered the questions I asked of it the previous season, I consider what I would like to learn from the garden during the upcoming growing season and how to design the garden accordingly. Here’s what I am asking the 2022 garden to teach me.

Back in early 2021, when I was forming the garden design to answer questions about using wood ashes to re-mineralize garden soil, I did not realize that the garden would also ask and answer an entirely different question: what does it really make sense for me to grow in a backyard garden at this time of my life? Each year the garden asks at least one question of its own, and in fact I expect it to do so because it is a living system embedded in a nested series of larger living systems, just as I am. I didn’t expect it to be that particular question, however, even though each of the last few Augusts I have had it arise. But this past August the squirrels hit me over the head with it when they ate every kernel of every popcorn cob. The series of four posts on backyard garden reality was my way to understand and answer that question. I took those answers to heart when I designed this year’s garden.

To be specific, I realized that having now answered to my satisfaction the approximate size that a garden would need to be to provide marginally enough food for one vegan adult for one year in this climate, I can let go of that work and have a sensible backyard garden that leaves me more time for my other interests while providing Mike and I with a wide variety of fresh vegetables and fruits during late spring, summer, and autumn along with some stored and preserved foods in winter and spring. That means I will no longer grow corn or pumpkins in my backyard garden. By not growing corn I have only six beds that need to be dug and re-mineralized before planting and that need some level of weed control during the growing season. It may still be that six beds is more than I want to grow, so one of the questions that I am asking this year is how the six bed garden design fits in with the rest of my life. If the past few years are any indication, August will answer that question for me.

This also means that I will have three beds that were formerly set aside for corn that I can plant to something else or let revert to a mix of mowed plants. I’m still mulling over possibilities and not yet ready to commit to a particular design. I would like to have more flowers and more herbs in this part of the garden, but I need to do some more thinking and research before I make any decisions on what to plant.

I do know that I will remove the current raspberry plants, and I have already planted a different variety in one of the three beds that held popcorn last year. The current raspberry plants show evidence of plant disease in lowered yield and poorer quality berries than in past years. The old raspberry bed will become one of the beds with herbs or flowers or whatever else I decide to do with the three beds no longer growing corn. The strawberry bed still is producing a good yield of high quality berries, so it will remain in place for 2022.

Meanwhile, the six vegetable beds will be mostly the same as in past years, but I am posing a few questions for the garden to answer. One of them concerns replacing the bush cowpeas with a bush lima bean variety. For the past couple of years I have grown a pole lima bean, but it flowers late enough that most of the beans do not mature before frost. Meanwhile, the bush cowpea plants are too tall and flop over onto the neighboring beds. This year I am trialing a bush lima bean that is supposed to grow to only 18 inches tall and may mature more quickly than the pole lima bean as the dry bean crop. I’ll grow a yard-long bean that I have grown before and liked as one of the two pole bean varieties. Yard-long beans are the same genus and species as cowpeas. This means I will grow four different kinds of legumes, all different species that don’t cross: snap (green) and yard-long pole beans, bush lima beans, and an edamame variety of soybeans.

I’m asking two questions of the potato onions, a type of multiplier onion. I plant them as bulbs, with smaller bulbs growing to a larger size and larger bulbs dividing into several smaller ones. As the summer solstice approaches the bulbs go dormant. When that happens I dig them up and let the bulbs dry. After they dry I split up the clusters of bulbs and sort all the bulbs into 4 size classes. We eat the largest ones (2 inches or more in diameter) at that time, reserving the remainder. I plant the 1.5 to 2 inch diameter onions in one-third of the bed I have allotted for them in late October or early November and the 1 to 1.5 inch diameter onions in the remaining two-thirds of the bed, mulching them with autumn leaves to prevent them from frost-heaving. We then eat all of the remaining onions, which have been mostly the smallest ones, less than 1 inch in diameter. In early March I remove the mulch from the potato onion bed and allow them to grow until they go dormant and the process repeats. This is the procedure I learned from the company I bought starter bulbs from, which claims that autumn planting leads to larger bulbs than spring planting.

I enjoy growing these onions; as plants I find them appealing, I plant them at a time when they do not conflict with other garden duties, the bulbs have the strong onion taste characteristic of yellow onions that both my husband and I like, and in theory I could grow enough of them to provide a significant fraction of our onions. However, many to most of the 1 to 1.5 inch diameter onions rot and die before harvesting. If we are to have enough onions to make a noticeable dent in our onion purchases, I need to figure out how to plant them so most of them will grow and be harvested.

Last year I read Kelly Winterton’s publications on potato onions. He practices spring planting in his Utah location and says they do better planted in spring than in autumn where he lives. He also soaks the onions in bleach before he plants them, which he claims leads to better survival and larger bulbs. As a result I decided that this year I would plant the 1.5 to 2 inch diameter bulbs in autumn and mulch them as in the past, using them as a control, but I would hold the 1 to 1.5 inch onion bulbs in storage in the basement until the soil thaws in March and then plant them. The first question was if they would survive that long without sprouting; I’m pleased to say that the answer is yes. On March 6 I planted the open space in the bed with 1 to 1.5 inch diameter onions using the same in-row and between-row spacing as I have in the past. The next question will be how well they yield with spring planting. My hypothesis is that even if individual bulbs don’t grow as large, the overall yield will be larger because a smaller percentage will rot before harvest.

Even though Winterton recommends soaking in a weak bleach solution prior to planting, I won’t try that this year. If I change two things – planting date and presoaking – I won’t know which one, or both together, might have caused any changes that I may observe. If the garden tells me that spring planting leads to a higher yield, I’ll consider an experiment with presoaking in 2023.

In the 20 years that I have grown potato onions, none of them have ever gone to seed. I didn’t know that they could produce seeds until my friend Lisa Brunette at Brunette Gardens shared a link to Winterton’s publications with me. Winterton has had potato onions produce flowers and seeds, so he has learned how to grow them from seed and developed new potato onion varieties from some of those plants. Last year some of the potato onions that Lisa grew produced flowers and seeds, and she has very generously shared the seed with me. I’ve started seeds for both of us so that they may teach me how to grow them, sharing the plants that result with Lisa. I’m sure the seeds will be happy to receive your well-wishes for good germination and growth! I’ll share what the seeds teach me with all of you in turn.

If I have enough wood ashes to use to re-mineralize the squash-family and bean-family beds, I’ll use them and urine to provide nitrogen, to test how that combination works for those two plant families. Mike and I did not use the wood stove much this winter, so I will not have as much wood ashes for re-mineralization as last year.

That’s all for now. I wish everyone a happy spring!

Posted by SLClaire at 7:51 PM No comments: