Tea for Two in the Lou 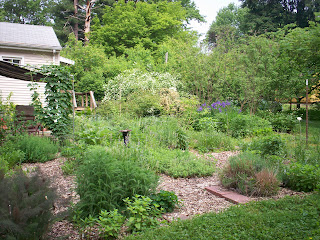 Now that the Siberian irises are blooming (the blue flowers in the photo above) ruby-throated hummingbirds spend a lot of time in our yard. Yesterday Mike and I watched them work the iris flowers as well as other flowers in the gardens surrounding the patio. The warmer weather and lack of rain (except on the 20th) of the last couple of weeks has allowed me to finish planting the last of the cool weather crops and prepare and plant the first bed of warm season crops: the bed containing peppers, eggplants, ground cherries, tomatillos, tomatoes, and basil. Meanwhile I’ve already harvested four pounds of strawberries in just five days!

Count me in among the set of gardeners who like to push the limits of what they can grow. Just because something isn’t supposed to be able to survive a St. Louis winter -- or a St. Louis summer -- doesn’t always mean that it won’t. It does seem highly unlikely that during my lifetime I’ll be able to grow, say, a coconut palm in my yard. But I may be able to grow more than gardening books, nursery catalogs, and the USDA claim that I can.

Those of you who garden in the U.S. are likely familiar with the USDA Zone Map as many retailers mark their perennial plants with a range of USDA zones in which the plant is supposed to thrive. Each zone marks out locations with the same range of lowest expected winter temperatures because winter lows are one of the key factors that determine whether or not a perennial plant survives to grow another season past the one in which you purchased and planted it. Generally the farther south the location within the U.S., the wider the range of plants that can be grown because of milder winter conditions. However, some plants need a period of winter cold to survive (most daffodils and tulips, for instance) or need at least some winter chill hours to set blossoms and fruit (most apple varieties), so a plant’s zone rating is often a range, such as Zones 5-9.

The problem with relying on zone ratings to determine what you can grow in your area is severalfold. The first issue is that the zone ratings seem more rigid and exact than they really are. Plants, like people, are individuals. Some plants of a given species, variety, or cultivar may have a slightly different genetic make-up that allows them to survive colder temperatures than most other plants of that type, or conversely, makes them less able to survive cold weather. We gardeners can’t tell by looking if the particular plant we buy or receive will live up to its zone rating or be the occasional individual that is exceptionally hardy or exceptionally delicate. We have to plant it to find out if it survives our weather and climate conditions.

Even without that problem, zone ratings are inexact. Sometimes plants can survive colder temperatures under snow cover than they do the same temperature in a St. Louis winter that mostly lacks snow cover. Some plants can take the dry summer heat of the West better than a humid summer of the South, or vice versa. Sometimes you can help a plant to survive by putting it in a spot in your garden that is warmer or cooler than the rest of the garden, what gardeners call a microclimate, thus extending the range of what you can grow beyond your official USDA zone rating.

Catalogs don’t always agree on the zone rating for a particular species or cultivar. As an example, Raintree Nursery claims that ‘Enterprise’ apple trees are hardy in Zones 4-9 while Stark Bro’s claims they are hardy in Zones 4-7. Which is correct? I don’t know. My ‘Enterprise’ tree is doing fine but I don’t know if someone in Atlanta or New Orleans could grow it or not. Neither catalog tells me how many chilling hours it needs to bloom, information that would help more than the zone rating for someone in the south who wants to know if he or she can grow this apple variety.

As if all that isn’t enough to cause a person to question the usefulness of zone ratings, then there is the issue of whether the USDA Zone Map actually reflects on-the-ground reality. Consider the 2012 map, the latest one available. It puts St. Louis in the middle of Zone 6, where the coldest winter lows would be expected to be in the range of 0F to -10F. But the official lowest winter temperature for St. Louis has not dropped below 0F since 1999! That fact suggests that St. Louis is currently somewhere in Zone 7 (lowest winter temperatures between 10F and 0F) rather than Zone 6. This is quite a change from when I first moved to St. Louis in 1984 and through the 1980s and 1990s, when the lowest winter temperatures routinely dropped below 0F and sometimes dropped below -10F. The last two winters have seen the lowest temperatures closer to 10F than 0F. If this trend holds, we could be close to the border between USDA Zones 7 and 8 in terms of winter hardiness. That would allow me to grow some southern plants that I wouldn’t otherwise be able to grow, especially if I take care to locate them in an appropriate microclimate.

One classic southern plant of interest to me is the camellia. Most of the zone ratings I’ve seen for camellias put their northern hardiness limit at Zone 8 though some cultivars are hardy to Zone 7 or even Zone 6. The only camellias I’ve seen in St. Louis so far have been in the Linnean House, one of the oldest greenhouses west of the Mississippi River, at the Missouri Botanical Garden. During a winter visit the camellia flowers in the Linnean House provide a welcome shot of vivid color to relieve the gray-brownness of a typical St. Louis winter day.

In theory I could keep a camellia alive on my glassed-in front porch during the winter as it has never gotten colder than the mid 20sF, but that space is small and already overcrowded. I’m much more interested in the possibility of keeping a camellia planted outside alive. And not a floral camellia either, despite my enjoyment of them. The camellia I have in mind is Camellia sinensis, otherwise known as tea. This is the plant from whose leaves we get black, oolong, green, white, and the other types of the caffeinated beverage we call tea. The type of tea obtained depends on which leaves are taken and how they are processed as well as on the particular variety of the plant and where it is grown.

I am a tea drinker. I don’t like coffee at all, but tea is another matter. I limit myself to one or two cups a day most days because of the caffeine content and also because I buy organic, fairly traded tea as much as possible. This is one plant that I’d like to grow in my yard, even if I have to coddle it a bit, because I’d feel better about being able to provide even a little of a beverage that I drink so much of. And we are so close to being able to grow it that it seems worthwhile to spend a little money and time on some plants.

It has taken me awhile to decide on where to grow the tea plants. Since I don’t discount the possibility that St. Louis could experience winter lows close to or even below 0F in the future, a site protected from winter winds seems best. The articles I've read on growing tea plants suggest that they are quite adaptable to my conditions otherwise: they can grow in Zone 7, they like acid soil, and they can tolerate summer heat and drought. They grow in full sun to partial shade. The best location seems to be on the east side of our house, where they would enjoy morning and early afternoon sun yet would be protected from cold northwest and north winter winds. That space was already occupied by two spiraea shrubs. All I had to do was remove them and a few companions, including poison ivy, and in a few years I can be harvesting, processing, and drying tea for Mike and myself. Not much, probably, but I can always drop my consumption of tea down to what I can harvest and for the rest drink herbal teas like spearmint and lemon balm that I also grow and harvest for that purpose.

A month ago, after cutting the spiraea shrubs to the ground (carefully so as to avoid contact with the poison ivy), I planted two tea plants that I purchased from Edible Landscaping and which they claim are hardy to Zone 7. Whenever I plant young trees and shrubs I always protect them with a circle of hardware cloth to keep the local rabbits from nibbling them down to stubs. The photo below that I took a few days ago shows one of the tea plants within its protective cage. Both plants seem to be doing well so far. I plan to leave them unprotected next winter unless the low is predicted to be near or below zero. In that case I will cover each plant with a large pot overnight. Once the plants grow tall enough I plan to leave them unprotected all winter long. In a few years I hope to make tea for two in the Lou from our own plants! 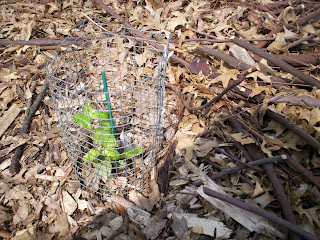