Leaf blowers as the end stage of petroleum addiction 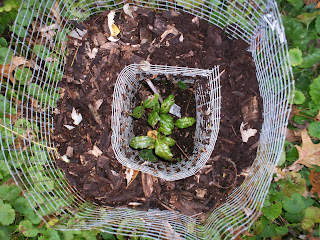 After a very warm day yesterday with a high of 69F/20C, winter is bearing down on us today. It won't be as bad here as in much of the rest of the US. We may only get an inch or two of a mix of sleet and snow, and that mostly snow, by the time the storm winds down tomorrow afternoon or evening. But it will be much colder than normal for at least the next week according to the St. Louis NWS, with the highs not even reaching freezing. Anything that falls from the sky in a frozen state will remain in that state on the ground. With lows supposed to be in the single digit F range by Saturday morning,  the tea plants will receive a good test of their ability to survive our winters. Above you can see one of the tea plants within a double cage. The inner cage protects them from rabbit attack. The outer cage holds in a ring of bark mulch that is about as high as the tea plant. The idea is that the bark mulch will provide some insulation for the tea plant, enabling it to better survive in a zone in which it is marginally hardy at best. I took this photo in mid November when the weeds around it were still green. Since then we've had some low temps in the teens. The tea plant looks as good now as it does above. We'll see if it still looks that good as winter progresses.

Today I am in the mood to rant about a piece of equipment whose existence seems pointless to me. That would be the leaf blower. Now that the oak trees have shed most of their leaves, people are using leaf blowers to do exactly the same thing that a good rake does: move leaves into piles. Why in the world would anyone want a leaf blower to do that? They are loud. They are heavy and their vibration is uncomfortable, if not actually harmful, to one's body. They cost a lot of money, use expensive gasoline, and need occasional if not frequent maintenance. A leaf rake, by contrast, is cheap, quiet, and easier on the body as well as providing better exercise. In thirty years of use the only maintenance our rake has needed is to have the business end screwed back into the handle after the original attachment device came off. A properly designed and used rake clears the ground of leaves as well as a leaf blower does. I find raking leaves to be meditative; it provides a chance to be outside and observant of the goings-on of birds, squirrels, rabbits, and other beings. I don't rake more leaves than I want to haul off to the compost pile or to use as winter mulch in the veggie garden, so it doesn't become a burden. True, a too-thick layer of leaves does weaken or kill lawn grass by cutting off light, so I understand folks who care about the quality of their lawns wanting to prevent that from happening. But most of those folks also have lawnmowers. Why not just run the lawnmower over the lawn whenever needed to shred the leaves enough that they won't block light from the grass? No need to buy yet another machine (except for the makers and sellers of leaf blowers, of course).

And what is the point of all those piles of leaves, anyway? If you live in a municipality that vacuums up unwanted leaves from the edge of the street and hauls them off to a big compost pile, fine (although you could as easily rake the leaves onto a big tarp and then haul the tarp to the edge of the street as use a leaf blower to move the leaves). But we don't live in such a municipality. Piles at the edge of the street, or anywhere else, just sit there, with the leaves blowing back into place over time. Shredding the leaves with a lawnmower makes more sense as the shreds won't block light and don't tend to blow around, instead filtering down to soil level and becoming food for small critters and soil microbes, improving the soil quality. Lawnmowers are noisy too (unless you have a human-powered reel mower) but at least they are multiple-purpose machines that many of us already have and they turn a potential problem, matted whole leaves, into a solution, free organic matter for your soil, unlike the leaf blower.

The leaf blower is just one tiny manifestation of a huge problem: what John Michael Greer calls the religion of progress, the elevation of Man above the natural world and Man's subsequent obsession with attempting to conquer nature. Read JMG's latest post for a very funny story of how this came about but, more importantly, why it's ending. Then contemplate the leaf blower as one example of the end stage of petroleum addiction. While the cure may not be easy or pleasant, it'll be easier and less unpleasant the sooner you admit your addiction and start weaning yourself away from the drug. Getting rid of the leaf blower is one small step in the right direction.