Of voles and sweet potatoes 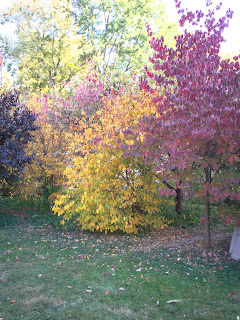 When we arrive at this, the most colorful time of autumn, I enjoy one last glorious show of reds, yellows, greens, and purples before the gray-and-brown monotony of late fall and winter. Above you can see two dogwoods (the red leaves) flanking a spicebush (yellow-orange). In back the fading green of silver maples and in front, the still-green grass sets off the flaming colors.

A few days ago, I awoke to a light frost covering the ground around the vegetable gardens. As the season’s first frost, it toasted the sweet potato leaves, signaling time to harvest. This year I planted three different varieties. So far I have harvested all of two of them and a few of the third. Of the two I have harvested completely, ‘O’Henry’ suffered from extensive predation by a ground-dwelling creature whose identity remains unknown (though I suspect voles because they are said to eat succulent root systems such as sweet potato tubers). For some of the plants, all of the tubers except for the skins were eaten. Other tubers have large craters eaten into them or show signs that what I was left with was less than half of what had been there. The few that were undamaged or only lightly damaged are quite large, evidence that had I been left most of the tubers, this variety would have outyielded ‘Ginseng’. ‘Ginseng’s’ tubers are smaller but they suffered much less predation. Both of these varieties made most of their tubers under the central portion of the plant, while ‘Hernandez’, the variety which remains to be harvested, has already yielded a number of small tubers that formed on parts of the vines that intruded into ‘O’Henry’s’ part of the bed. We haven’t yet done a taste test of the varieties; it’ll be interesting to see how they compare.

I was quite disappointed and humbled by the evidence of extensive predation of what would have been the high-yielding variety. Those of you who have been reading along with me know that I have been trying to grow crops that can provide lots of calories for the space they take up, to understand if it’s possible to grow something close to a complete diet in a backyard-sized garden. Sweet potatoes should fill an important niche in this regard: they grow well in our long, hot summers and they store longer and in warmer, lighter conditions than regular potatoes. Part of growing a complete diet is eating the right foods at the right time, and that means having at least one high-calorie staple crop to eat at all times of the year. The potato varieties I grow aren’t ready till August and they begin to sprout and rot as the basement warms up in spring. Grains can be used year-round, but it takes much more space to grow a grain crop than a tuber crop. Ideally sweet potatoes could be stored through winter and then eaten in spring through early summer, when the regular potatoes are no longer available. Grains could fill the calorie niche from then till regular potatoes are harvested. But if the sweet potatoes can’t stand up to predation, that strategy won’t work. Hence my disappointment and humility. Beaten by small mammals ... I’ll have more to say about this when I write up the results of this year’s garden and what I’ve learned from it.

Meanwhile, Mike continues working on the woodshed. The photo below shows the framing almost complete. 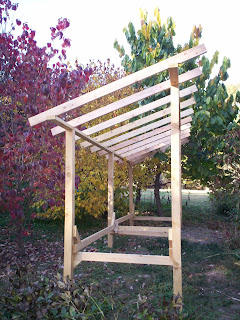 Next he’ll add some more bracing and the roof purlins (the pieces that lie on top of and at right angles to the roof rafters), followed by the roof deck and top. It’ll have a metal roof because he says that’s the easiest kind of roof for him to install. Then he’ll need to add some kind of floor framing to hold shorter pieces than the four foot width. We have made one fire in the wood stove so far, the evening of the 18th (it frosted that morning). That one fire, made with dry wood, heated up the house several degrees so we did not need to run the gas furnace. With this week’s warm weather, the house is warm enough to not need any added heat beyond what we let in through open windows during the day. Take that, electric and natural gas providers!

Most of the vegetable garden is no longer producing food. I’ve picked the popcorn, most of the blackeyed peas, and all the squash. The frost was not heavy enough to kill the tomatoes, peppers, or pole snap beans. They continue to make some food, though as the soil and weather cool and hours of sunlight diminish, less is available at each picking. I may get another two or three weeks of slight production from them before frost kills them. However, the two beds of fall greens and roots are full of beautiful food, as you can see below. 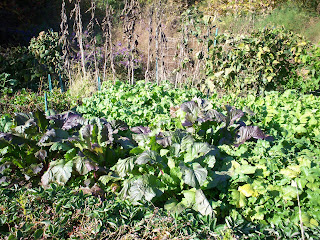 The purple is ‘Purple Rapa Mix’ mustard greens. I’ll have to figure out how to preserve some of them; even then I expect there will be enough to give some away. The other greens are turnips, radishes, and arugula. Outside of the picture we have large bok choy and smaller kale for stir-fries as well as lettuce for salads.

Another autumn project, now mostly complete, has been to dig a new rain garden to accept overflow from the 500 gallon water tank that collects rain from the garden shed roof. Around here it’s suggested to make a rain garden about 1/3 of the area of the roof if it were flat. Our shed is 120 square feet, so the rain garden is about 40 square feet. I dug it by hand, with the tools in the photo below. It took a couple of hours because I wasn’t working that hard. 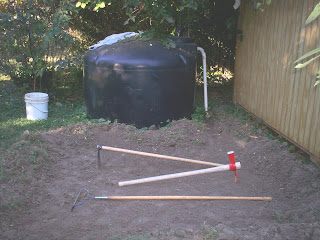 Unlike summer, autumn has been very dry. I measured about 1.1 inches of rain in September. So far October hasn’t brought enough rain to measure. In order to give the rain garden plants a good start, I first ran over 100 gallons of stored rain water into the depression to moisten the soil before adding the plants. I chose a mix of appropriate native plants suggested by a publication titled Native Plant Rain Gardens co-produced by the Missouri Departments of Conservation and Agriculture in 2004. After planting them, I ran another 100 gallons or so of stored rain water into the depression, to settle the plants into their new home. The last step will be to mulch them; when that is complete, I’ll post a photo. I’m hoping that the claimed weather pattern change, to a more normal mix of occasional rainy days, will materialize to help the trees and shrubs I planted in spring settle into late fall and winter.

The tea camellias I talked about in this post died, alas. So this past spring I bought and planted new ones from Camellia Forest Nursery. They’ve done very well and are supposed to be at least marginally hardy here. But I want to improve their chances to survive winter cold. So I did what I should have done years ago after I first read it: I bought Palms Won’t Grow Here by David Francko. (I suggest searching for a used hardback edition so you can see the beautiful color plates rather than the print-on-demand paperback version with its blurry black-and-white photocopies of said plates). Anyone who is trying to push their hardiness limits to grow plants that aren’t supposed to grow in their location needs this book. Not only does it tell me how to protect my tea camellias (mulch them in early winter with a foot or so of oak leaves and consider surrounding them with a wind barrier and coating the leaves with an antidessicant), and how to keep the flowerbuds on my hydrangeas alive (cover the plants with oak leaves to overwinter the budded branches) but it tells me how to grow palms, bananas, and other plants in the ground here in the St. Louis region. Sure, people grow bananas here; I’ve done it myself. But we dig them up after the first autumn frost, keeping them in the basement for the winter, and plant them back out in May, after the last spring frost. This book tells us which kinds of bananas we can wrap up for winter, sheltering them in place in the ground. And while no one here bats an eye at the sight of a crape myrtle (they seem to be everywhere) or a southern magnolia (less common but still many examples around town), I haven’t seen anyone growing a camellia of any sort outside, much less a palm. Maybe a few palms in the front yard, out where passersby can see them, would be fun to grow. And now that we had the dying blue spruce removed, I finally have space for a southern magnolia!

Next post I will continue the series on keeping warm in a minimally-heated house.
Posted by SLClaire at 5:33 PM