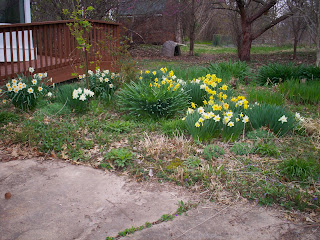 In the last post, I discussed the two different conversations I’m having with potato onions during this growing season. In one of the conversations I’ve asked the onions to compare survival from spring planting versus autumn planting. I’ve hypothesized that spring planting will result in a higher percentage of plants surviving to harvest and for that reason a higher yield. In the other conversation I’m asking potato onion seeds that Lisa Brunette’s plants produced last year to teach me how to grow them. Both the onions and the seeds have made a first response to my questions.

On November 10 of last year I planted seven rows of 1.5 to 2 inch diameter potato onion and four rows of three different varieties of garlic, mulching all of them with fallen maple leaves. In early March I removed most of the mulch, because I have found from previous experience that if I do not remove most of the mulch then, most of the onions die. As best as I can tell, death results either from rotting before sprouting, or from the leaves of sprouted onions failing to grow above the mulch layer before the energy of the bulb is spent. If I do not mulch after planting in autumn, most of the onions die over the winter from frost-heaving (being pushed above the surface of the soil). Frost-heaving is the bane of lower Midwest winters. Highly variable temperatures during winter cause the soil to freeze and then thaw multiple times before the final thaw in early spring. The mulch keeps the onions from frost-heaving, but it can also cause them to rot through excessive moisture or prevent the leaves from emerging before the energy of the bulbs is spent. 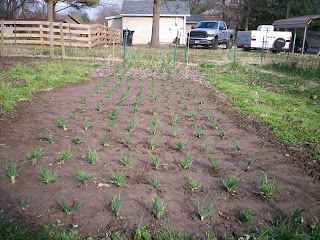 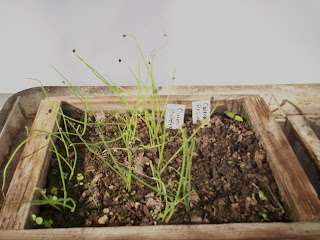 Meanwhile, on March 3 I planted the potato onion seeds that Lisa Brunette gave me. You can see the seedlings that have resulted in the photo above. They are the long thin leaves on the left side of the flat. Later this month I will transplant them into one of the garden beds so they can grow on. I didn’t plant all of the seeds in case something went wrong; the remainder are being kept in the freezer for planting next spring. 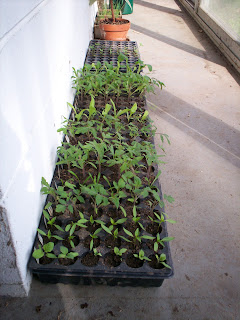 Lastly, the photo above shows the flats of seedlings that I will plant in the garden over the next several weeks.

Until next time, enjoy life!