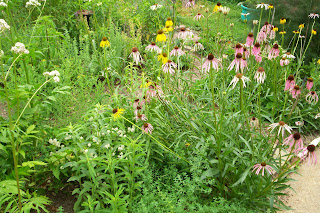 Above: this year's pale purple, glade, and yellow coneflowers in glorious bloom.


Today we are experiencing the first decent rainfall in the last month. Since all the rain barrels filled to overflowing from being empty, it appears that a half inch or more has fallen since the rain began. Considering that I had measured only about a quarter inch of rain in the preceding month, today’s rain is a big help. Combined with rather cool temperatures forecast for the next few days, at least for June in St. Louis, it means very little watering outside of the container plants will be needed this week.

Mike and I have been watering for multiple hours each day for the past couple of weeks (me the vegetable gardens and a spring-planted perennial border, him the mycelium-inoculated mulch piles and logs), in order to keep plants and mycelia alive and growing. We are fortunate that St. Louis has a steady water supply from the Missouri, Mississippi, and Meramec Rivers available to permit us to do this. We also collect roof runoff in six 55 gallon drums sitting under our downspouts, used primarily for watering container plants and also as a backup source to drain into the rain garden during drought periods. The rain garden receives its water as overflow from one set of two linked barrels and also directly from half of the roof over our front porch. This weekend I noticed that the great blue lobelia and jewelweed plants in the rain gardens were wilting from lack of water, so I emptied the two sets of two linked rain barrels into the rain garden. Each was around half full, so the rain garden received something in the vicinity of 150 to 200 gallons of water. The water in the other two barrels fed some new trees, shrubs, a grapevine, and chocolate mint plants I added this spring as well as the collection of subtropical and tropical plants in containers. I had just used up the rest of the collected water two days ago, so today’s rain is most timely!

Planted: hull-less pumpkin seeds. I noticed that some self-seeded bok choy plants have appeared in the butternut squash bed. These are progeny from last year’s bok choy plants. This week I’ll move some of them to where the current bolting bok choy plants are, to become the fall bok choy crop, and leave a few others to be companions to the squash plants. I’ve successfully raised bok choy seedlings over the summer for fall planting in the past, so I have reason to believe this strategy will work. I’ll collect seeds from this year’s bolting plants as well.

Preserved: I froze some more plums.

Waste not: we are doing just fine so far without air conditioning, though I will note that it hasn’t gotten real hot yet. The house has not gone above 83F, and that was a couple weeks ago during the hot spell the last weekend of May. This weekend we left the house open rather than close it up it the morning when the high was forecast to be around 90F. My theory has been that the house would warm up more slowly if we didn’t let the hot outside air in, waiting until after sunset when temperatures cooled to re-open the windows. Because we’ve had the house sealed, the effect has been to also keep generated humidity in the house. It felt better, we discovered, to allow low-humidity air to keep moving through even if it may have raised the interior temperature a degree or so above what it would have been if we’d closed the windows in the morning ... and I’m not sure it got any hotter after all. We’ll have to try this when the dewpoints are in the 60Fs or even 70Fs, more typical of St. Louis summers, rather than in the 40Fs to 50Fs that they have been this summer, to see if it holds true then as well.

Want not: we bought a used fruit press, a small one suitable for home tincture pressing and wine-making, and another used 5 gallon glass carboy for wine-making.

Skill up: I’m mulling over how to attach a chicken coop to the south side of a garden shed and construct the coop in such a way as to use solar heat to keep the chickens more comfortable in the winter. Basically the coop would be designed as a small solar greenhouse. Constructing the two will be a fall project. I already have a location in mind.