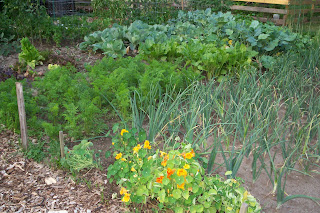 Above: Part of our vegetable garden as of June 16.

We received about an inch and a half of rain at our house in the past week; not enough to end the developing drought, but maybe enough to keep it from getting much worse. Meanwhile, the warmer than normal temperatures, lower than usual relative humidity, and the approach of the summer solstice have combined to cause my lettuce crop to stop growing and start drying out or to bolt (go to seed). Growing full-sized lettuce heads in St. Louis, even those of short maturity, isn’t that easy. Springs are short and warm up too fast; fall often starts out too warm and ends early because of lack of sufficient daylight hours and/or turning too cold. I like lettuce enough to keep growing it, but over the years the amount of square feet I devote to lettuce is shrinking in favor of crops that better handle the weather. If the trend of warm March weather continues, I may try planting it earlier and see if that leads to success.

I’m ready to give up on spring-planted bok choy and mustard greens as these bolt before becoming full-grown due to hot weather and long days. Fall plantings can be chancy too if we experience hotter than normal weather in August and September. If I can get the seeds germinated, the fall crops last longer, sometimes well into December though they stop growing by mid November. Collards, kale, cabbage, broccoli, and turnips withstand heat in May and June much better than the before-mentioned green leafy crops so are worth growing as spring crops; some of the kale and collard plants live through summer to provide summer and fall greens. The appearance of self-sown bok choy in the squash bed has gotten me to wondering if I might do best with that crop by starting it in early June and allowing it to grow over summer to mature in fall. It’s proven to be rather heat-tolerant as long as daylight hours are decreasing.

Planted: a week ago I moved some of the self-sown bok choy plants from the squash bed into their designated location in one of the greens beds. They seem to have taken despite increasing heat and breezy to windy weather over the past week. Yesterday I planted popcorn seeds, the last crop to plant before a round of fall planting in August (unless I decide to try a fall crop of potatoes after I dig the French Fingerling potato bed later this week).

Harvested: the last of the spring lettuce crop; shell peas; snow peas; collards; broccoli; turnip greens and roots; nasturtium flowers; dill; plums; a few potatoes that had grow up from pieces left in last year’s beds, dug up as I was preparing the beds for the popcorn crop. I also set aside some black walnuts that fell out of the neighbor’s tree onto our backyard, as I learn how best to remove the hulls.

Waste not: I’ve been boiling water for tea and cooking rice in our solar oven since we are getting a lot of clear to partly cloudy days, avoiding use of the electric stove and electric rice cooker for these tasks. About two weeks ago I baked two loaves of bread in the solar oven and achieved success. The key was a clear day, careful aiming during the first few hours, and cooking for several hours (as I recall they were in the oven six hours or more). Our solar oven heats up to between 300-350F on a clear day when it’s properly aimed.

We still haven’t turned on the A/C even though we are now experiencing highs in the mid 90sF. Nights have been running in the upper 60sF-low 70sF so we have been able to sleep well without the A/C. The St. Louis National Weather Service office hasn’t declared a heat advisory yet; our usual practice is to not turn on the A/C until we are under that or an excessive heat warning. Last weekend when I was digging the beds for the popcorn, I seemed to be one of the few people willing to be outside in the heat. Naturally I took breaks and drank plenty of water so as to stay safe.

I attempted to avoid waste of a cheap digital watch by putting in a new battery and getting the broken plastic watchband replaced with a flexible metal band. However, after a few days water vapor got into the watch and corroded something, rendering it useless. Mike pulled out the battery and the movement and took off the replacement band. I’m planning to purchase another cheap water-resistant digital watch (useful for my Stream Team work); I’ll save the watchband and battery for it when needed. Mike took the case; he thinks he could make a wrist-mounted compass if he finds a compass small enough to fit into it. The good news is that the jeweler I bought the watchband from is resizing my wedding ring and doing repair work on both our wedding rings, thus ensuring their continued life.

Want not: I finally received my birthday present from Mike, a copy of Peter Bane’s new book The Permaculture Handbook. This wasn’t Mike’s fault. The book was supposed to be available in February, the month of my birthday, so he pre-ordered a copy for me last November. Copies are just now being shipped.

Eat the food: more stir-fries with various greens, turnips, or snow peas, served atop Missouri-grown rice. More salads with the lettuce, dill, and nasturtium flowers from my garden, and Missouri-grown onions. Mike sauteed the garden peas with the new potatoes for a nice side dish. We started eating the remainder of last year’s kimchi so there will be space in the refrigerator for the sauerkraut Mike will make from the cabbages when they are ready in the next few weeks.